All You Need Is Love - prints available 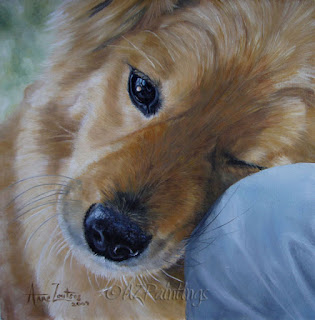 All You Need Is Love

I am delighted to announce that prints of the above painting are now available to purchase in a variety of formats from Redbubble. To purchase click on the 'Prints' page of my website and then Open Edition Prints.

I would like to thank Noël Zia Lee who took the photograph on which this painting is based for her kindness and generosity in allowing prints to be made available.
Posted by annezoutsos at 09:55 5 comments: 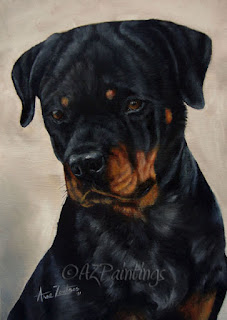 
I have just managed to get a better photograph of this painting (well remembered to do so to be honest) and thought I would tell you about the first time I got to know a rottweiler. It was many years ago, when we lived in London near Hyde Park. A couple who lived near us had two young rottweilers and the wife told me that her husband had wanted two guard dogs - they were rather wealthy! - but she had wanted two cuddly, pretty dogs and so they settled on rottweilers as being the perfect match. Well, I never discovered how they were at their guard duties, although I suspect very good, but as cuddly, pretty dogs they were perfect and certainly very friendly to those invited to their house, just wanting to play!

It's a shame rottweilers have developed a reputation for aggressiveness because although very strong, when they are properly brought up, they are lovely dogs.

Anne
Posted by annezoutsos at 14:57 No comments: