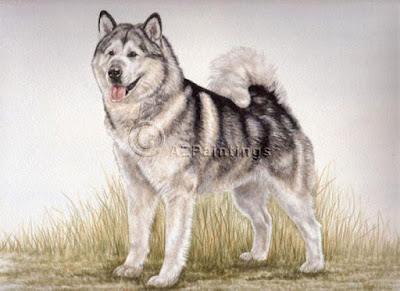 I thought it might be nice to occasionally include news of some of the dogs I have painted.
Today's news though isn't of a dog I have painted but he belongs to Sue Ellis for whom I painted the portrait above - her Ch Chayo Blue Thunder. Blue is the first Champion Malamute in the UK and of course I am very proud to have painted him and no doubt Sue is equally proud to have bred him and to own him.
The dog in the news today is Sue's Ch Chayo Dom Perignon ShCM who has won an unprecedented two Best In Show awards at general championship shows in the UK and is the first Alaskan Malamute to win a Best in Show at a general championship show. Sue obviously has a knack of breaking records with her dogs! Loius (Dom Perignon) is a son of Blue.
Posted by annezoutsos at 16:54 1 comment: