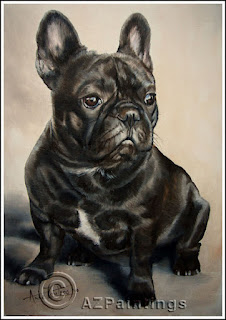 French Bulldog (Frenchie) - 7" x 5" oil on hardboard/masonite
I painted this little fellow as part of the February Dog Breed Project held by Wet Canvas - the site for artists. His photograph was kindly supplied by his owner Lori Zebiere, a fellow artist.
When this painting is sold, I will make a donation of 10% from the profits to Save The Dalmatians - and so it will be a breed apparently not originating in France, helping a breed said not to originate in Dalmatia!! :)
SOLD
Posted by annezoutsos at 06:16 2 comments:

In A Dog's Eyes 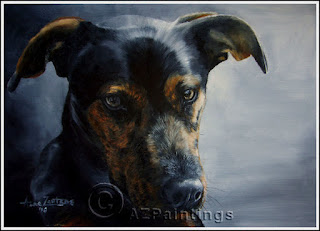 In A Dog's Eyes - 7" x 5" oil on hardboard/masonite
I don't understand how one can look into the eyes of a dog such as this and not reach out to help it - here is this dog's story.
Rex was on the euthanasia list at the Metro Louisville Animal Shelter, just because he's mainly black and not the kind of dog who gets adopted quickly. A woman called Eileen, who has rescued many dogs, became attached to him, and when he started getting very stressed in the shelter environment and it looked like he was in danger of euthanasia again, she championed him. That decision led to a confrontation with the animal care manager that resulted in Eileen adopting Rex herself and then finding him a wonderful home in Connecticut and making the 14 hour drive with him to take him to his new home.
Rex is doing great in his new home, where he lives with a work-at-home dad, mum who works and goes to school, a boy in first grade, and another dog, a Corgi named Baron. He's living the good life now - all thanks to one woman's determination.
A 10% donation will be made to Noah's Bark pet rescue once this painting is sold
SOLD
If you have any questions please email me at info@azpaintings.com
This painting is straight off the easel and will need several days to dry before it can be shipped.
With thanks to outlier dogs at flickr for the reference photograph and information
Posted by annezoutsos at 04:19 No comments: 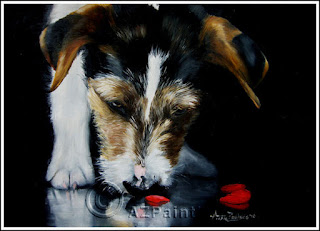 Don't Go Breaking My Heart - 7" x 5" oil on hardboard/masonite
When I started this painting, I had St Valentine's Day in mind (although this painting won't be dry in time for it to be a gift on that day). Then as I was painting, the title slipped into my mind - and the song has been in my head ever since! It occurred to me that the title of this painting not only relates to a human relationship, but it also says it all regarding the feelings we dog owners have towards our dogs when they become old and frail and we wish we could hang on to them forever.......................
Once sold a donation of 10% will be made to Noah's Bark pet rescue
SOLD
If you have any questions please email me at info@azpaintings.com

My thanks to Josh Pesavento for making the reference photo available through Creative Commons.
Posted by annezoutsos at 09:12 No comments:

A Kiss From A Rose 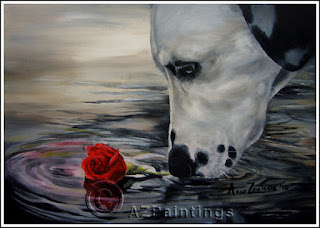 A Kiss From A Rose - 7" x 5" oil on hardboard/masonite
Another revisit to a previous painting as I simply couldn't resist the idea of using this painting with a Dalmatian instead of Alaskan Malamute as previously featured. It is one of my favourite paintings and seemed to call out to be painted so near to St Valentine's Day.  I hope you all enjoy seeing it as much as I enjoyed painting it.
When this painting is sold, I will make a donation from the profits to Save the Dalmatians, a charity based in California, who have made some inspiring saves of this wonderful breed. May I suggest you visit their website to see some of what they do and perhaps with 'love in the air' at this time of year, you might feel able to make a donation to help them with their work.
Donation of 10%  to Save the Dalmatians
Available at auction with no reserve - please click here to bid or view details

Background based on a photograph by Photos8.com
Posted by annezoutsos at 07:37 No comments: 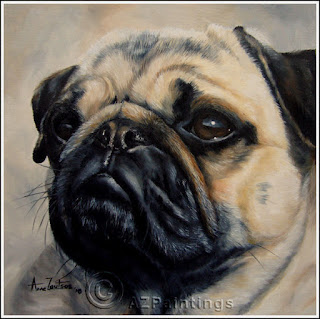 A Prettier Pug - 6" x 6" oil on hardboard/masonite
This little pug is one I have painted previously and decided to revisit again. Previously I gave the donation to Old Dog Haven and will do once again when this painting is sold. Old Dog Haven specialise in finding forever homes for elderly dogs and this is the reason they are one of my favourite charities to support.

So often when people are looking for a dog, they understandably either want a puppy or young dog - so where does this leave the poor older dog, whose life has often been turned upside down and left them in confusion and misery? Well, frankly, it's a question I don't like to dwell upon too much. However, the wonderful people at Old Dog Haven have done something about it and I would recommend a visit to their site where you can see some of the dogs they have helped, and some still waiting for their special home - (just click on the name to go to their site). Please consider helping if you can.

Any queries, please email me at info@azpaintings.com

My thanks to Mary Vogt for the reference photo
Posted by annezoutsos at 04:16 No comments: