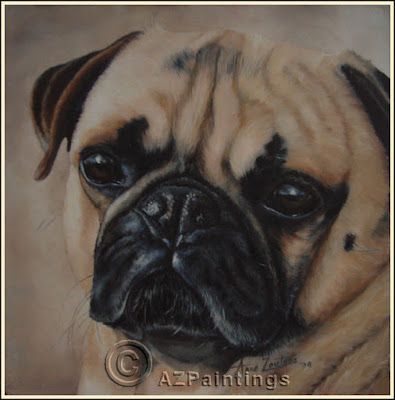 
This is the companion painting to my 'Pretty Pug' - a well cared for dog, living a happy, sunny life. Unfortunately the same cannot be said for a disgracefully large number of dogs. The people at Old Dog Haven say in their website that 'We think dogs are elite at age eight (and above)' and I think they are probably right! Sadly it is these very dogs who often have such a hard time finding new homes and it is thanks to people like those at Old Dog Haven that they stand a much better chance of a good life for their remaining years. Please take time to visit their website and perhaps consider making a donation.


10% donation to Old Dog Haven once this painting is sold.

This painting is recently off the easel and will need a few days drying time before it can be shipped.

My thanks to Mary Vogt at Morguefile for the reference photograph
Posted by annezoutsos at 00:07 No comments: 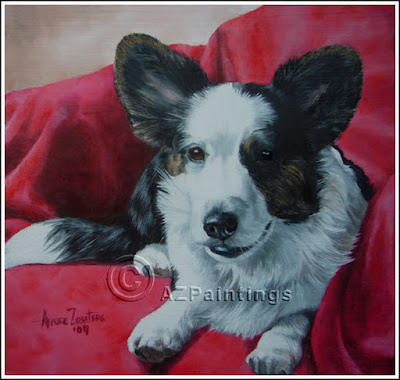 This painting came about as the result of a dog breed project on Wet Canvas (the site for artists). I was drawn (sorry, I can't stop punning!) to paint this dog as I particularly liked the complementary colours of the red against the black and white. This dog is a Cardigan Welsh Corgi and I love its pretty, alert expression.

Unfortunately there are many dogs whose lives are not happy. I find it hard to understand how someone can share years of companionship with a dog and then tire of it when it becomes old. I love puppies and young dogs with their energy and enthusiasm for life, but nothing can compare with the depth of love and affection of an older dog. Old Dog Haven takes in these older dogs and finds forever homes for them to end their days. If you live in the locality, maybe you could think about taking one of these seniors and giving it the love it deserves.


10% donation to Old Dog Haven when this painting is sold.

My thanks to M McGarrett for the reference photo
Posted by annezoutsos at 03:54 2 comments:

Lean On Me by Anne Zoutsos 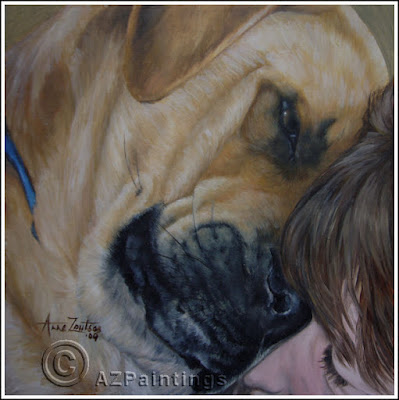 
The title of this painting is taken from the song of the same name written by Bill Withers - and I like his performance of it the best. I have always felt that for those of us lucky enough to enjoy the companionship of a dog, this song is so very apt. There can be few greater comforts in times of distress than a beloved dog.


Equally, our dogs should be able to lean on us and be secure knowing that we will always care for them. Unfortunately this is not always the case and sadly there are many dogs who need help.


A 10% donation will be made to Willing Hearts Dalmatian Rescue

Posted by annezoutsos at 06:36 No comments: 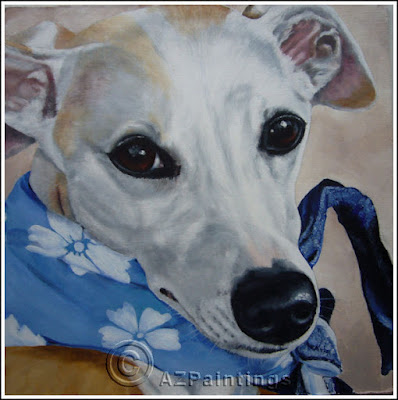 
I was delighted to recently have been given the opportunity to use the photographs in the website of Anne Stark's Piper whippets and dachshunds as reference for paintings. However, when I went on her site I was a little dismayed - there were so many lovely dogs that it was almost impossible to choose!


However, in the end I decided to paint Mable shown above; she was bred by Anne but is not owned by her. I was drawn to her (please excuse the pun!) as I fell in love with her sweet, kind expression and with her blue bandana, she looks dressed in her 'Sunday best'.


The donation from this painting will be going to another sighthound breed, the Salukis at STOLA.

This painting is recently off the easel and will need a few days' drying time before it can be shipped.
Posted by annezoutsos at 00:26 No comments: 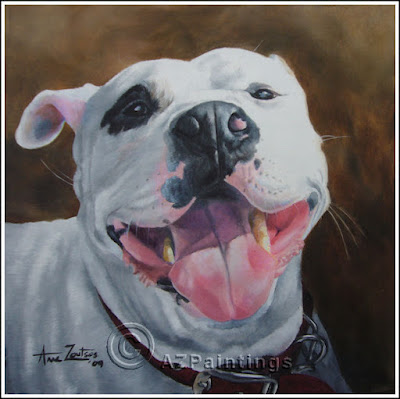 This poor, thin, undernourished dog was found by a young couple. She had been tied to a stake and abandoned in a park. Unfortunately these people had two large dogs of their own and so couldn't keep her. They put her details online and luckily a prospective owner saw these, went to meet this pitbull (probable) mix and fell in love with her. He adopted her and.....they lived happily ever after.

This girl was fortunate to be adopted by a caring and loving owner - nearly 5 years ago now. Sadly the same cannot be said for a great many dogs and this breed has probably suffered more abuse at the hands of humans than many others.

If you're thinking of buying or adopting a dog, make sure you get a dog that will fit in with your lifestyle - take advice if necessary. Don't forget - a dog is for life.

This painting is straight off the easel and will need several days drying time before it can be shipped
Posted by annezoutsos at 16:20 No comments:

The Kiss by Anne Zoutsos 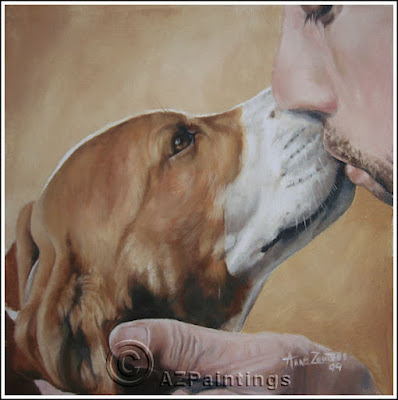 Well I suppose this isn't quite a Rodin or Klimt but for dog lovers, it will probably mean as much - or even more! For those who have been following my paintings, you will, I expect, by now realise that I believe the relationship between man and dog to be something very special. My paintings are dedicated to those dogs - and occasionally other animals - whose lives suffer because of humans and my hope that those of us who care, can bring sunshine and happiness into their lives.

My thanks to newandrew at Flickr for making this photo available
Posted by annezoutsos at 13:51 No comments: 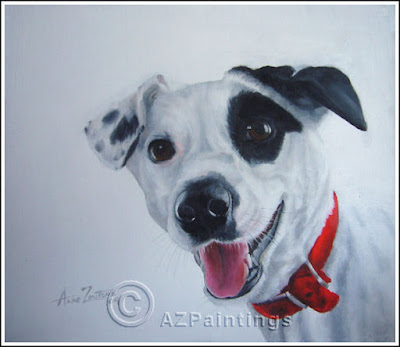 
The story of this dog, and thus the name of the painting, is as follows -


When this dog was a very tiny, young puppy (presumably an unwanted stray) she somehow became stuck in the wheel structure of a car and it was only by supreme luck that the driver heard her howl when she started the car. With assistance from her father, the driver managed to extricate the little puppy who was alive but whose leg was badly gashed. The pup was taken to a vet who stitched the leg but thought that it might need amputating.

Sadly the pup's rescuer was not able to keep a dog and so took her to kennels in the hope that someone would want her. However, she could not forget the look in the puppy's eyes and so rushed back to the kennels and took her home! The pup did need an operation on her leg but didn't lose it and it healed well.

And now..... the puppy has grown into an affectionate and happy dog, rewarding her rescuers with love and a joyous attitude to life which her owners find infectiously enriches their own lives.

A donation of 10% from the profits of this painting will be made to TBAR - True Blue Animal Rescue - helping animals less fortunate than this one.

My thanks to Kris de Curtis at Flikr for permission to use the photograph of his little Chicca
Posted by annezoutsos at 13:06 No comments: 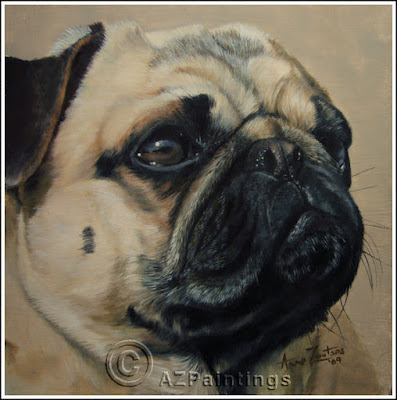 
Who can resist such a pretty face?

A 10% donation from the profits of this painting will be made to Old Dog Haven.


If you're not really looking to buy a painting at the moment but would like to start off the month with doing something worthwhile, please consider taking the time to visit them by visiting Old Dog Haven and make a donation direct, or even better, perhaps if you don't live too far away and have some love to spare, you would be able to foster or adopt one of these poor senior dogs.

The reference photo for this painting was one of the lovely photographs taken by Mary Vogt which she has generously made available on Morguefile
Posted by annezoutsos at 01:48 No comments: