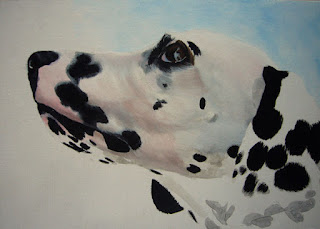 Looking To The Light - 7" x 5" oil on hardboard/masonite
Here is my latest 'evening' (or 'relaxing') painting - or at least as far as I have got with it.


I had very mixed feelings about painting this particular Dalmatian called Sydney as her story is rather a sad one...
Sydney was a puppy rescued by Dalmatian Rescue of Southwest Virginia, and she was suffering from a disease called megaesophagus. The rescuers did all in their power to try and give Sydney a chance at life - and in fact worked extraordinarily hard to do so. Her progress was followed by many of us on facebook, enchanted by this sweet, frail puppy. Very sadly her struggle with life became too much for her  little body to take and she was released from this existence with love and compassion.
It still brings tears to my eyes as I write this and you may wonder why I decided to go ahead with her portrait. I suppose for me it is a way of honouring both her existence and the massive efforts made on her behalf by DRSWV. I think it goes without saying that the donation from this painting once it is finished and sold, will be going to the rescue who did so much for her, and who give so much time and care to rescuing and finding forever homes for Dalmatians in need - Dalmatian Rescue of Southwest Virginia.


If you would like to contact me my email address is info@azpaintings.com
My thanks to Diana Morgan Crush for allowing me to use her photograph

Addendum : this painting is now booked for purchase on completion
Posted by annezoutsos at 12:46 8 comments:

Boxer portrait and a little tuition

Boxer - Charleigh Bear - 20" x 16" oil on canvas
I was approached by Charleigh's owner, Louise Hitchen, shortly after CB's tragic loss giving birth to a litter of puppies.  Unsurprisingly Louise was in a terrible state having lost her 'baby' and wanted a fitting tribute to her lovely girl.
I think it goes without saying that as an artist in this situation, the responsibility to create an accurate memorial, both in physical appearance and in character, weighs heavily.
Louise supplied me with a lovely, professionally taken photograph as shown below: 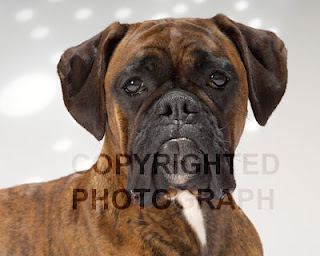 You will notice that I have changed the reflections in her eyes quite considerably which may surprise some. The reason for this is that although it looks very appealing in the photograph, when put into painting form, if I had kept them as they are shown here, they would have appeared lifeless - you can't always paint exactly what you see in a photo.
Here is the first WIP 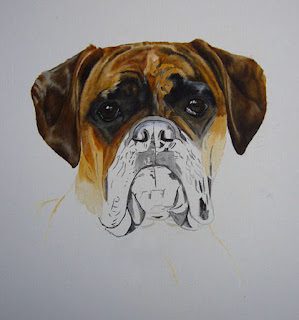 As CB was a brindle, the painting in of the black hairs takes a long time to prevent them just looked 'daubed' on.
The second and final WIP is shown below: 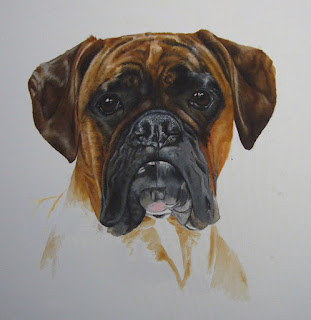 You can see one side of the face is finished here and the other side is at the 'undercoat' stage. I  fractionally altered the amount of visible 'third eyelid' in her right (as you look at it) eye and decided to leave out her back as I didn't feel it added anything to the painting and drew attention away from her eyes.
I am of course delighted that Louise is thrilled with Charleigh's portrait  (despite it causing a few tears) and also pleased to report that because of the dedicated hand-rearing and wonderful care given by Louise,  the whole of CB's litter survived and have grown into strong, healthy puppies all now in their new homes. All except for two that is - they have been kept to become Louise's very own loved and spoilt babies.

If you would like to commission a painting of your own pet, please email me at info@azpaintings.com or click on the 'shop' button in the menu above and go to the 'commissioning a painting' page.

Ever Hopeful - 10" x 8 " oil on hardboard/masonite
Well here is the finished painting - again I've had great trouble trying to get an accurate photo and this is as close as I can get.
This painting is SOLD
The donation from it (10%) is going to Dalmatian Rescue of South Florida/North Miami

in memory of Hope RIP 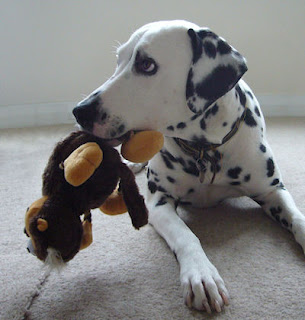 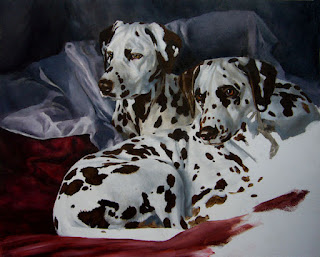 Ever Hopeful - 10" x 8" oil on hardboard/masonite
Well, this is going to be my last work in progress for this painting. I found it very difficult to get an accurate photo of it, partly because the light kept reflecting off the wet oil paint and partly it seems because of the different tones in the painting which the camera had difficulty in capturing. This is as close as I can get it for accuracy and is a reasonably accurate copy.
I know that quite a few people starting out painting find it difficult to give their paintings depth and this is usually due to lack of tone. I always suggest to novice artists who have this problem, to make a monochrome copy of their painting as it will then often reveal to them the lack of difference in tone. For interest I made a monochrome copy of this painting as shown below: 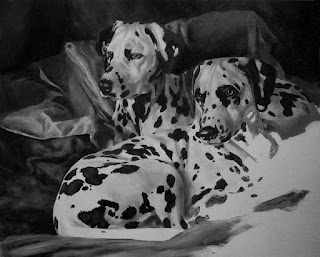 You can see that the painting still retains depth even when the colour has been stripped from it. The difference in tones keeps interest in the painting and this is what we artists are striving for.
The painting will be finished shortly (I hope!)
If you have any questions, please email me at info@azpaintings.com
Posted by annezoutsos at 13:31 2 comments: 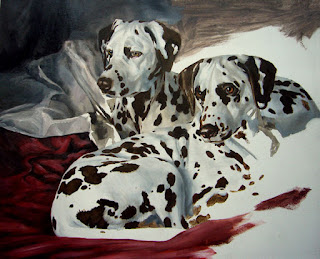 Ever Hopeful - 10" x 8" oil on hardboard/masonite
This is Ever Hopeful a little further on - only painting in the evenings still as I'm busy with commissions during the day. It's frustrating though, as I'm itching to get it finished, but I must just be patient!
If you would like me to paint your own pet, just email me at info@azpaintings.com or click on the 'shop' button in the menu above and then the 'commissioning a painting' button.
Posted by annezoutsos at 05:02 6 comments:

This is totally off topic but if you have 10 minutes to spare in your busy day I thought you might enjoy sitting back listening to the music and reading the words of the well known but nevertheless always apt "Desiderata".
I hope that if you were maybe feeling stressed before watching this, you now feel relaxed and at peace. :)
Posted by annezoutsos at 03:47 No comments:

Ever Hopeful - 10" x 8"oil on hardboard/masonite
I think most reading this blog will know that I paint full-time. A lot of people think that painting all day must be a very relaxing occupation - well for some it may be, but not for me. I love it and am obsessed by it, but when I am painting portrait commissions, it is hard work as a considerable amount of concentration is necessary to ensure the painting is an accurate portrait. So, after the day's work is finished, the dogs are walked and dinner eaten, what do I do to relax? Paint of course! The difference with these 'evening' paintings (also quite often painted during the day when I can't bear not to get on with them!) is that I don't have to make the dogs featured look exactly like the photographic reference - although I must admit that a lot of them do, but the difference is that they don't have to, which removes the element of, well, I suppose, stress.
The painting above is one of my 'relaxing paintings' and I still have quite a way to go with it. The plan at the moment is that it will have a dark background when finished. The owner and photographer of these dogs is Dawn 'Simengaard' Jaworski, a friend I met on facebook - thank you Dawn for sending the photo to me.
Once the painting is finished it will be offered for sale with a donation of 10% being made to Dalmatian Rescue of North Miami in memory of Hope - RIP

If you wish you can see some photos of Hope here although I warn you they are upsetting. Sadly she died shortly after being rescued.
Posted by annezoutsos at 07:28 4 comments: