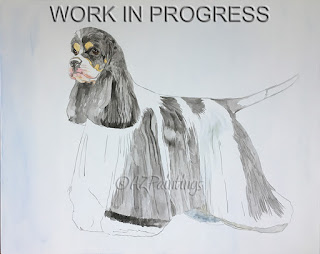 I've been asked if I could explain the process of creating Miami's portrait, so will start with the first work in progress photo and an explanation of the steps involved.

I was sent some photographs of Miami by the Kennel Club and out of these selected several to sketch to see which I liked best. Eventually I chose one photo of his head and a different one of his body which I felt would work well. At this stage I wasn't sure of the background and had lots of different ideas floating around which I'll discuss later. So here is the beginning stage of Miami's painting.